The first illuminations or decorative lighting features along Marine Parade were installed in 1987 as part of a £250,000 project initiated by the Great Yarmouth Publicity Association.

The scheme nearly crumpled at the last minute when the existing column were deemed inadequate to support the new lighting features. After some hard negotiations the Borough Council agreed to pay for new columns at a cost of £70,000.

The brand new schemed was eventually switch on in May 1987 amidst a blaze of glory and excitement. Reynolds Coaches even started doing evening Illuminations tours.

The new scheme was intended to have a 10 year life but actually stayed in place for 20 years when new columns where introduced in 2007 as part of the £16m INTEGREAT project.

It was again left to the private sector to add-in the decorative features into the new columns. The Greater Yarmouth Tourist Authority took the lead and worked with around 10 local businesses who agreed to sponsor new features designed by local school children.

Sadly after the initial 3-year sponsorship package interest in renewing the sponsorship waned as many felt that the same few businesses where propping up the many. The lighting features started thus to fall into dis-repair.

The lighting was commission through ‘Festive Lighting’ and installed by ‘Cozens Lighting’, who installed the original lighting back in 1987. 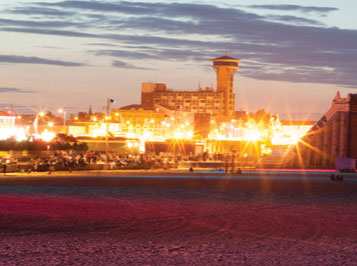